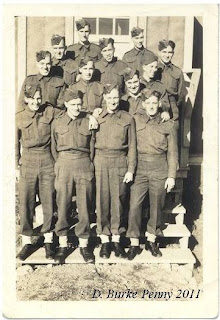 October, 1941.  A group of Signallers in Debert, N.S., "Taken just before boys left on train" (for Ottawa).  A week later they were in Vancouver boarding the S.S. Awatea bound for Hong Kong.

Of the thirteen young men pictured, five did not make it back to Canada:  Greenberg was killed in action; Horvath and Fairley died of battle wounds; Redhead and Little died of illness while POWs.