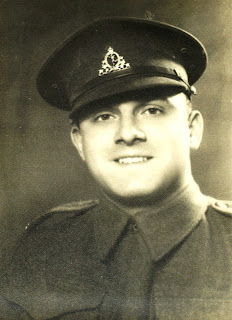 Signalman Ted Kurluk, R.C.C.S.
Had an interesting visit with Dan Kurluk, his wife and son. Dan’s brother, Ted, was with the Signal Corps in Hong Kong.  He was eventually sent to Japan, spending Christmas, 1943 onboard a ship bound for Narumi POW camp.  The family shared some stories, photos and other memorabilia with me.
Ted was quite an artist.  On his aluminum mess tin (which interestingly appears to be an item that originally belonged to one of the British soldiers at Hong Kong – see below) he engraved pictures, words and images, reflecting his experiences in Hong Kong and Japan. 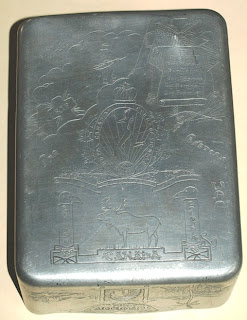 The side with the handle attached has the name of a company located in Birmingham stamped on it with the date, 1939. Also present is the British Broad Arrow, a mark signifying that the item belonged to the British government, a practice going back centuries.  After the battle of Hong Kong when the Canadians were gathered in the camps at North Point and Shamshuipo, most of them had virtually none of their kit with them.  So everyone scrounged around to find whatever utensils they could.  They might refurbish an old pot or if they were lucky they might find a discarded mess tin or other useful container left by a departing soldier or casualty.  Ted was fortunate to have a good aluminum utensil in his possession and obviously kept it with him for the duration of the war.  It’s a fine piece and one the family can cherish, not only for what it says about Ted as an artist, but also for the stories of his experiences it records.
Thanks to Dan Kurluk and his family for their permission to include the photos on my blog.
Posted by Burke Penny at 8:02 PM