A Visit to the Memorial Wall

I spent August 15th  - that important date for Hong Kong veterans and families among others – with Gerry Gerrard and his grandson Brian.  We were in Ottawa for Gerry’s first look at the “C” Force Memorial Wall and a visit to the War Museum.  It was great to see Gerry there, looking very distinguished with his medals proudly on display. 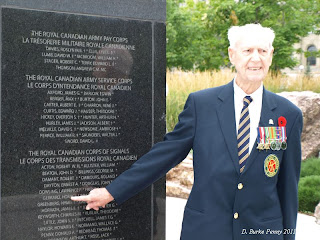 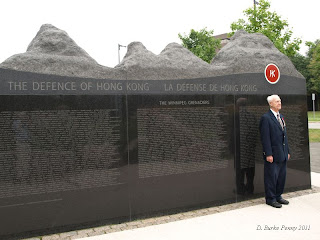 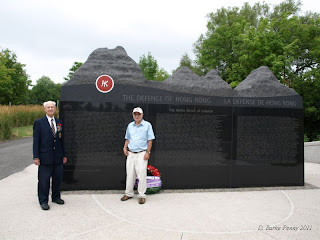 Looking at the R.C.C.S. panel, you can’t help but be struck by the number of crosses beside names in the small group of thirty-three.  Nine didn’t make it back to Canada – a ratio of almost one out of three. 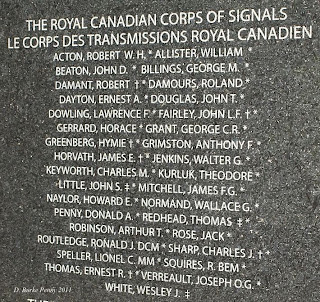 Dispatch Riders Bob Damant and Ernie Thomas, and Operators Hank Greenberg and Charlie Sharp were killed in action.  Operators Bud Fairley and Jim Horvath died of wounds received during the battle. Operators John Little, Tom Redhead and Wes White succumbed to illness while prisoners in Hong Kong.
Thomas (from Vancouver), Damant (Montreal), Greenberg (Roblin, Man.) and Sharp (Victoria) died on the same day, December 19.  Gerry Gerrard described to me what happened with Thomas: “...then we were at Wong Nei Chong Gap – we were there for a while.  I don’t know where some of the guys were, I was dispatching guys out and sending them different places...Ernie Thomas was killed there....(Capt.) Billings told me, he says send a dispatch rider down to the front line and so I asked for a volunteer, which I didn’t get.  I can remember now, I got some straws and cut a short one and said OK pick out, and Ernie was the one that picked out...and that’s the last we saw of him.” He had just turned 25 on December 2nd.  Bob Damant was 21, Hank Greenberg was 22 and Charlie Sharp was 26.
Gerry was also at Wanchai Gap where the other three were killed by an artillery shell that hit the house on Coombe Road where the Signallers had set up their radio. He had just walked in when the shell hit.  The blast knocked him down but he was able to walk out covered in dust and debris and help with the injured.  Signalman Rolly D’Amours was also there: “I crossed the room on the north side and was just coming into the room on the south side when a 9.2 shell crashed through the north wall and exploded right in the middle of the sleeping men.  The blast threw me forward and my head slammed into a wall so hard that it broke the straps inside of my steel helmet, and gave me a terrible headache.  I tried to go through the room on the north side to get medical help, but the dust was so thick and the screams of the dying men so horrible that is was like going through hell.” (Roland D’Amours Autobiography, courtesy of Pierre D’Amours)
Both Bud Fairley (from Merritt, BC) and Jim Horvath (Winnipeg) were wounded during the attack and would later die of their injuries. They were both 22 years old.  In his personal notebook, my uncle, Don Penny, recorded Brigade Headquarters casualties.

As noted on the second page, John Little (Terrace, BC), Wes White (Abbotsford, BC) and Tom Redhead (Victoria) all died while in Bowen Road Hospital in Hong Kong. Little’s case of dysentery never got better and he died on June 5, 1942.  He was only 20 years old.  In August, a diphtheria epidemic raged through the camp.  Many succumbed, including White (who was 22) on September 25, and Redhead (26) five days later.
Here are the faces of those nine young men with the crosses beside their names.
Bob Damant 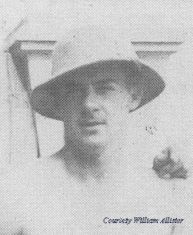 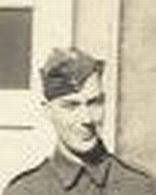 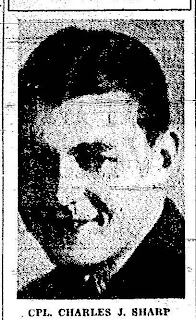 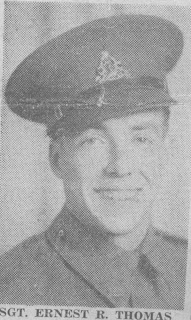 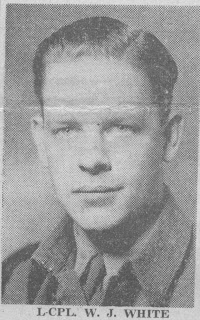