The morning of Sunday, December 7, 1941, became etched in our historical record when the Japanese attacked the U.S. base at Pearl Harbor.  Generally overlooked in discussions of that day in history is the fact that at the same time – the pre-dawn hours of Monday, December 8, Hong Kong time (on the other side of the International Date Line)  – Japanese forces crossed the Chinese border and invaded the British colony.  But unlike the complete surprise of Pearl Harbor, the attack on Hong Kong had been long anticipated.
In the week prior to the commencement of fighting, defences on both the mainland and the Island of Hong Kong were elevated to a state of readiness.  On December 6th a warning was issued of impending war.  On Sunday the 7th the commanding officer of the colony forces, Major General Maltby, came to the conclusion that war was imminent.  At 1100 hours orders were issued for the whole garrison to move to their battle positions.
The Canadian Military Headquarters report (#163) on “Canadian Participation in the Defence of Hong Kong” provides the official description of how the war with Japan began:
At 0550 hours on Monday, 8 Dec 41 (1720 hours Sunday, 7 Dec, Ottawa time), H.Q. China Command received word through Naval channels that war had broken out with Japan.  All defence services were warned.  At 0745 hours Kai Tak Airport was dive-bombed.  The attacking force consisted of 45 single-seater fighters with forward guns.  All R.A.F. and civilian aircraft were caught on the ground and virtually destroyed….The enemy air attack was then directed on the Sham Shui Po area, which was bombed and machine gunned.  The Jubilee Buildings were hit and two R.C. Sigs signalmen were wounded.  These were the first casualties sustained by “C” Force.
The two Signals were Operators Lloyd “Bud” Fairley and Sgt. Ron Routledge, who had shrapnel wounds in his back, shin, thigh and forearm. In a post-war interview, Routledge described the situation:
It was pretty confusing you know because everybody realized they had to get out of the barracks and…they brought in some trucks and people started getting up on the trucks and very few people, if any others knew that this other chap and I were, had been wounded, and so they were sort of saying, “goodbye” and “you’ll be in another truck” sort of thing, you know.  But that didn’t happen and they all left the Shamshuipo barracks and I wouldn’t be altogether sure where they all went at that particular time but certainly it was, or someone realized that we were in trouble in that shell hole and came and got us and took us to the Bowen Road Hospital in Hong Kong. (www.vac-acc.gc.ca/remembers) 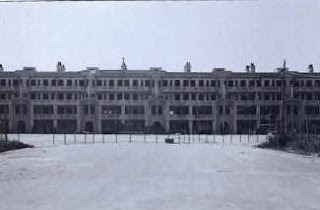 Jubilee Building http://gwulo.com/node/6695
When the attack began, Blacky Verreault was in the Jubilee Building barracks.  He recorded the event in his diary:
We were lounging on the balcony when Walt [Jenkins] noticed some thirty airplanes overhead then “shit, they’re dropping something…those are bombs Blackie,” said he staring skyward, his mouth open.  The first bomb demolished the guard house, the second made an enormous crater in our parade ground, the third smashed the corner of our building while the fourth fell smack in the middle of it.  What a blast.  We were almost blown off the balcony.  We just then realized that this was not just some simple British exercise.  I packed my things and hopped in a truck that took us to the hills. (Diary of a Prisoner of War in Japan 1941-1945)
Gerry Gerrard had just finished breakfast and was operating one of the temporary wireless sets out on the parade square.  He saw the bombs fall and the barracks being hit.  Then orders came in to move immediately to the pre-determined manning stations.  He told me,
…the truck just rolled up and we threw our stuff on – we were gone.  Trouble is we had no personal stuff with us.…
Normally we would have our equipment mounted on trucks, but in Hong Kong we were delivered to our destination and given a good luck wave.
The two “casualties” were treated and released for duty.  Less than three weeks later, Bud Fairley died of wounds received during the shelling of a house where the Signals had set up their radio.  Sgt. Routledge was captured when the colony surrendered and spent the rest of the war as a prisoner of the Japanese. He was active in passing messages to the outside and acquiring much needed medical supplies.  His activities led to him being arrested but under torture and threats he refused to give the names of the others involved. On his return to Canada he was awarded the Distinguished Conduct Medal for constant courage under brutal treatment and punishment.
December 8, 1941 marked the first Canadian engagement with the enemy in World War II.  The members of "C" Force did their country proud both during the battle and later as POWs.  Regarding the members of the R.C.C.S., the history of the Corps noted:
Hong Kong was the occasion for the first Canadian brigade signals to go into action in the Second World War, and it acquitted itself commendably.  These Signalmen, in the words of the British Chief Signal officer, "did all he could have hoped."  In addition, they performed in the last stage as infantry, and fought valiantly.
(History of the Royal Canadian Corps of Signals 1903-1961)
Posted by Burke Penny at 3:52 PM