One of my earliest childhood memories is of Remembrance Day.  I was watching a parade in downtown Vancouver waiting to see my uncle, Donald A. Penny, Royal Canadian Corps of Signals.  About five years had passed since his return from a POW camp in Japan where he had spent much of the war after being captured in Hong Kong on Christmas Day, 1941.  Unlike most of his Signal Corps companions, he and few others had decided to stay in the service, and so here I was on that cold rainy November morning watching him march toward the cenotaph.
For most of my life, Uncle Don was the person I thought about on Remembrance Day.  I didn’t know much about his soldiering experiences, but he was the only person I knew well that had been in the war.  It wasn’t until I had spent a few years researching and writing a book about the Hong Kong R.C.C.S. contingent that I had other personal connections to WW II veterans.  So now as we approach Remembrance Day, 2011, I have many more names and faces to occupy my thoughts. 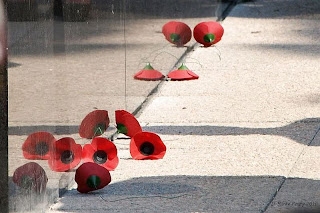 Defence of Hong Kong, "C" Force Memorial Wall, Ottawa
I was fortunate to get to know seven of the Signal Corps Hong Kong vets.  Through interviews in person, on the telephone and by letters and email, I learned about their training and trip to Hong Kong, experiences during the fighting, their struggles to survive the horrors of Japanese POW camps, and their post-war lives.
I’ll remember Wally Normand who had to bury his friend and fellow Dispatch Rider Bob Damant in a common grave after he was killed in action on December 19, 1941.
I’ll remember Signalman Will Allister who told me about lying in a field with fellow Operator Rolly D’Amours sending messages on their No. 11 wireless set while Japanese shells exploded around them.  He was relating this story while we were sitting out on the patio behind his house overlooking the span of water between Tsawwassen and Vancouver Island.  To me the events he was describing were far away from the idyllic setting, but they were still obviously clear and present in his mind.
I’ll remember Dispatch Rider Jim Mitchell.  We sat in the living room of his daughter’s house in a small mining town near Sudbury, Ontario and spent the afternoon talking about his wartime experiences. He related a story of the end of the war at Ohasi POW camp in Japan:  “A plane came over and that night the Jap guards disappeared and we never saw them again.  The next day a plane came again and dropped a parachute with a note, a package of Camel cigarettes and two strips of white canvas approximately 10 inches wide and 8-10 feet long; and the message read, ‘If you need medical supplies make a cross and if you need food make a T”.  Everybody was screaming “T T T”.
I’ll remember Bob Acton, another Operator who stayed with the Signals after the war.  He told me about surrendering: “...they told us to go to a field that’s in the city – I don’t know what it was for; it wasn’t very big – and first they said to us, ‘smash your guns’, so we just bent the barrels by hitting the cement with them.  Then we went to this place and they had built a stage and the Jap Commander came up and spoke Japanese and the interpreter said, ‘If I had my way I would line you all up and shoot you dead, but headquarters in Tokyo won’t let me do that.’  So right away we thought it’s going to be a tough go.”
I’ll remember Lionel Speller and Tony Grimston.  I met them at Broadmead, a veterans care centre in Victoria.  Lionel was a shoemaker by trade and told me about how as a POW in Japan he was put to work repairing and making boots using rubber tires for soles.  Tony related a story about the day when some of his fellow Signals were killed in a house at Wanchai Gap.  He was in the next room working the radio and survived the shelling.
I’ll remember Gerry Gerrard.  It was Gerry who took me to see Lionel and Tony.  We have spent many hours over the past few years sitting in his kitchen talking about Hong Kong and Japan.  Gerry has become a good friend and was a great contributor to the research and writing of my book.  One of his stories that will always stick in my mind is of him sending out Dispatch Riders with messages: “[Capt.] Billings told me [to] send a Dispatch Rider down to the front line, and so I asked for a volunteer, which I didn’t get.  I can remember now, I got some straws and cut a short one and said, OK pick out, and Ernie [Thomas] was the one that picked out...and that’s the last we saw of him.”
Through official records, diaries and stories related by others, I also got to know at least a bit about the other twenty-six members of the R.C.C.S. who went to Hong Kong.  Men like Johnny Douglas, who was training in Prince Rupert with his high school buddy, Don Penny.  He was selected to participate in the Remembrance Day service on November 11, 1939.  “Our wreath bearer, Sgmn. Douglas, J., our youngest soldier, presented a very smart appearance” recorded the 9th Fortress Signals War Diary.
And Georges “Blacky” Verreault, who by all accounts was one of the strongest willed and toughest Signallers.  His diary is full of details about the battle and his time as a POW.  All the highs and lows, the times of elation, and the times of deep depression.
And Dispatch Rider Don Beaton who wrote from Guam after he had been liberated from a POW camp in Japan, “Right now I’m on top of the world.  The Yank Navy have taken over any Cdn. Army Prisoners in Japan.”
And Signals Operator Rolly D’Amours whose diary entries from pre-war Hong Kong gave a vivid picture of the city that would soon become a battlefield, including descriptions of establishments frequented by the troops as “places furnished [with] wine, women, music and food.”
And Lineman Raymond Squires who became a critical figure in the struggle to maintain the health of the Canadians being held prisoner in Hong Kong.  One of his diary entries captures the essence of survival as a POW: “I can honestly say that the main thing I live for is to be back with my wife, that thought makes this life tolerable, and gives me an optimistic viewpoint so sorely needed here.”
All thirty-three men of the Hong Kong R.C.C.S. contingent, including the nine who didn’t make it home, will be in my thoughts this Remembrance Day.  But there will still be a special place for memories of my uncle Don, who was the source of my introduction to this important annual event, and the inspiration for my book. 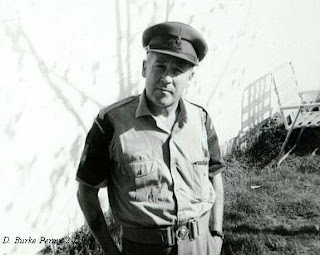