In early January, 1943, after being POWs in Hong Kong for just over a year, about 1200 men were identified for transport to Japan. Among the 663 Canadians selected were eleven members of the R.C.C.S., including my uncle, Don Penny.  Signalman Will Allister described the physical test to determine their eligibility: “We were lined up for a fitness test – we must be able to work in Japan.  We were each instructed to walk across the road.  Those who made it were pronounced physically sound, A-1 category.”  (Where Life and Death Hold Hands)  Capt. John Reid, a medical officer, was the only Canadian officer allowed to go.  In his post-war report he told what happened next.
We were isolated in the barracks at Hong Kong for a week before we left during which time we were vaccinated for cholera, dysentery, typhoid and they slipped a glass rod up everybody’s rectum.  I don’t know what you could find out except worms, a very poor way of going after stool,... (Reid, 1945, DND Directorate of History and Heritage, File 593, D17)
Among the Signals I talked to, there seemed to be agreement that the selected men were anxious but generally ambivalent about being sent to Japan.  As Gerry Gerrard said, “You didn’t know whether it was going to be for better or for worse.  I couldn’t see it being any better, because you had to figure that food wise it couldn’t be that great in Japan, we sure weren’t going to get our share, and just before we left there was a supply of Red Cross that came in.”  Jim Mitchell was worried about submarines, Bob Acton thought they might receive better treatment there, and Will Allister said at least the move gave them some hope.
On January 17 the men in the draft were issued some new clothes including running shoes, but they had to give up their boots.  On the morning of the 19th they were marched to the wharf and put on board the SS Tatuta Maru, a converted Japanese passenger ship.  Don Penny recorded the basic trip details in one of his notebooks. 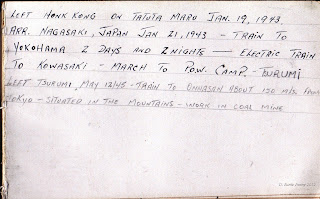 The actual experience on board the ship was described using words like “Black Hole of Calcutta” and “giant sardine tin packed with living, squirming human creatures”.  Severe heat, meagre food, seasickness, dysentery and bucket latrines all made for a pretty horrible three days.  When they arrived in Nagasaki, there was one unexpected good thing: fresh buns.  Capt. Reid noted, “When they came up and said five buns per man I couldn’t believe it and thought it must be one for five, but it wasn’t; they really tasted good and it was fine.  They issued cigarettes too.”
After a train ride and a short march, most of the Canadians ended up at the gates of a camp near Kawasaki, just northeast of Yokohama.  Designated Camp No. 5 (later changed to 3D), this was to be their home for many months to come.
As a footnote to this episode, the day the men left for Japan, January 19, 1943, was Signalman Gerry Gerrard’s 21st birthday.  Now, 69 years later, Gerry is marking his 90th, undoubtedly with more smiles, and a much more celebratory atmosphere.
Posted by Burke Penny at 3:59 PM