The is situated on the northeast side of the of , a short distance from the bustling city of .  The graves of two hundred and eighty-three Canadian soldiers are located here, including five members of the Royal Canadian Corps of Signals.  It is quiet and serene with dramatic rows of white grave markers stretching on and on down a slope towards the sea, against a panoramic view of distant wooded hills.  Further south on the island on the is .  Twenty Canadians are buried here including four Signals.  The graves are located on a hillside flanked by grassy slopes with flowering shrubs and ornamental trees.  The peace and tranquility of these two sites belie the events of December, 1941 when the island hills were the scene of fierce and bloody fighting as the days of the battle for raged on.  (From Prologue, Beyond the Call)

On Remembrance Day, we think about those who gave their lives in service to our country.  Young men such as members of the RCCS:  Jim Horvath, John Little, Tom Redhead, Ernie Thomas and Wes White, buried at Sai Wan, and Bob Damant, Bud Fairley, Hank Greenberg and Charles Sharp, buried at Stanley. 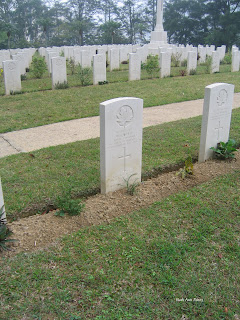 We also remember those who through sheer luck, fortitude, or unexplained miracles made it back to Canada.  Knowing what the men of “C” Force went through during the battle of Hong Kong, and for more than three and a half years as POWs, it truly does seem a miracle that any of them survived.  In particular, because I know their stories best, I will be thinking about the thirty-three men of the RCCS, those who died in Hong Kong, and those who made it back.  Only two are still with us today – Gerry Gerrard and Wally Normand, both fine gentlemen and proud veterans.  I salute them all.