Seventy-five years ago this Christmas, decorated trees, presents and singing carols were likely not on the minds of Canadian troops caught up in the losing battle of Hong Kong.  But it would certainly be a day they would remember, and not particularly fondly, with a surrender to the Japanese the order of the day. Far away from families and with an unknown future ahead of them they had seen friends killed and wounded and at least heard about numerous atrocities committed by enemy soldiers. Now seventy-five years later it’s important that we remember too.

For those of us who had relatives there in Hong Kong we have a very personal connection to that Christmas of 1941. In my case, it was my uncle, Donald Penny, a Corporal in the Royal Canadian Corps of Signals.  I don’t know for sure where Don was on December 25, 1941, but from the various accounts I’ve read he was with a small RCCS unit attached to East Brigade providing communications links between the Royal Rifles of Canada and Fortress Headquarters. Fellow Signals NCO Ron Routledge later said in an interview, “Surrender? Well, I recall being, well everyone had to, we had to stockpile all our arms in one particular place in a field and wait for orders from the Japanese...”

Any feelings of uncertainty I have about my uncle’s whereabouts that day pale in comparison to what his family must have been going through seventy-five years ago.  They knew about the battle in Hong Kong but had no idea if Don was alive, wounded or dead.  An article in the Vancouver Sun from December 26th reflects the lack of information available to family and friends back in Canada. 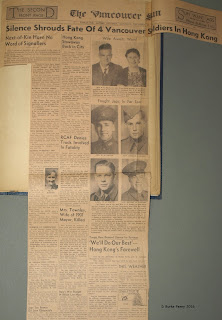 It wasn’t until November, 1942 that Don’s family received official word that he was a Prisoner of War.  Weeks later he and his fellow Canadian POWs would spend their first Christmas in captivity, most of them half-starved and malnourished in Sham Shui Po camp on the mainland of Hong Kong. On November 29th the camp received the first Red Cross parcel distribution.  As Signalman Walter Jenkins said, “...we all would have died in Hong Kong, you know, if it hadn’t been for the Red Cross.” One of my uncle Don's notebooks has a page showing the Red Cross parcel distributions while he was a POW. 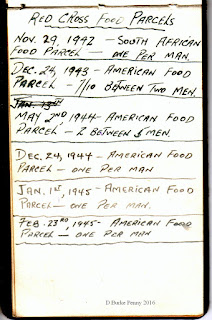 On Christmas Eve the men received their first official word from home, a message from the Prime Minister, Mackenzie King:
The Prime Minister of Canada requests the International Red Cross Committee to convey to all Canadians in prisoner of war or internment camps, on behalf of their relatives and friends in Canada, and also on behalf of the Canadian government and Canadian people, heartfelt Christmas greetings and best of wishes for the New Year.
The Prime Minister desires to assure them, one and all, that the thoughts of the Canadian people were never more of them and with them, than they are in the greetings they send at this Christmas season, and in the Wishes they send for the New Year.

The men also received a ten-yen note that could be spent in the camp canteen.  Signalman Ray Squires called it a “Godsend” buying among other things a half-jar of malt and codliver oil. Christmas dinner was a huge improvement on their usual evening meal. Tins of “Meat and Vegetables”, potatoes and even plum pudding were on the menu.  Services in the church hall included singing carols – a muted celebration to be sure, given the terrible conditions they were enduring as POWs, but still a time filled with more pleasant thoughts of home. 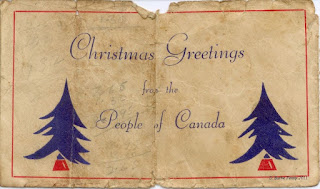 In early 1943, Don was one of about 600 Canadians transported to Japan.  He and a few other Signallers ended up in a camp near Tokyo; they were to be used as slave labour in a shipyard.  Christmas that year was described by Canadian officer, Capt. John Reid:
Two small pine trees we got today and some decorations.  This day a holiday was used for putting up decorations the men made themselves from scraps of this and that, they even made a fireplace with an electric light in it; it looked like a real fireplace, they made an amazing job.

One of Don’s mementos brought back from Japan was a mimeographed sheet of Christmas carols. On the reverse side he had made some notes about that Christmas.  His poignant letter home three weeks later put the Christmas celebrations into context. 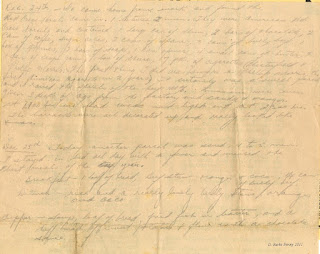 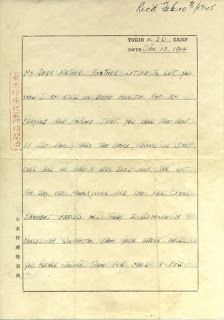 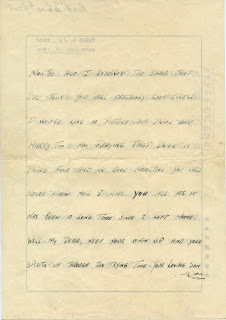 By December, 1944, life in Camp 3D had taken on a sense of anticipation. American bombers had begun runs over the Tokyo area giving the men new hope for a return home.  The arrival of more Red Cross parcels also boosted morale.  Preparations for Christmas went into high gear. Secret orders went out for materials that could be scrounged or stolen from the shipyard and turned into decorations. Again, Capt. Reid described the scene:
Christmas again this year was very successful – the men made very amazing decorations, with streamers and fireplaces and santa clauses and so on – really amazing and all made out of scraps gathered from here and there.  In the morning we had white rice, a great delicacy and soup with leeks and carrots and twenty kilograms of meat.  The leeks to flavour it were a wonderful delicacy. At noon each man had one loaf of bread with some miso paste.  Leek soup, Christmas pudding – two parts flour to one of sugar.  For supper fish, one hundred and twenty-five grams per man, white rice, soya soup, and sweet beans with sugar and Christmas pudding.  Red Cross parcels arrived in the camp and were issued one per man on Christmas eve.  The Church Service and Christmas carols on Christmas Eve, a concert by the orchestra and the Japanese again came in Christmas afternoon and took photos.

As it turned out, not only were the men of the Signal Corps at Camp 3D alive, by December, 1945 they would be back home in Canada celebrating a truly joyous Christmas with their families.