It was a cool foggy evening 70 years ago today, October 27, 1941, when the S.S. Awatea sailed out of Vancouver bound for Hong Kong.  Among the over 1800 soldiers on board were thirty-three members of the R.C.C.S. who formed the Bde. H.Q. Signals unit for “C” Force.
The Awatea was a New Zealand passenger liner designed to accommodate 540 passengers, so to say the least, the vessel was severely overcrowded.  Modifications had been done to convert it for troop transport, including covering the portholes with plywood.  Most of the men (other than officers and senior NCOs) were housed below decks, and it was here that the Signals unit first got to know each other. 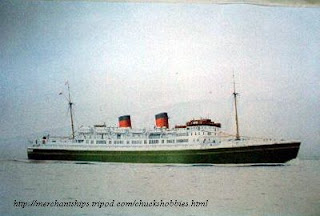 This was no “Band of Brothers” that had trained and lived together for months or years.  In fact, many had never met until they were onboard the Awatea.  Lineman “Blacky” Verreault noted in his diary, “I thought I would be the only lineman aboard but I just met three new buddies, Ted [Kurluk], Walter [Jenkins] and Ray [Squires].” (Diary of a Prisoner of War in Japan 1941-1945)  Signalman Will Allister, who was from Montreal, wrote, “[I] soon adopted Wally Normand and Bob Demant [sic], two madcap dispatch riders from Montreal, whose clowning antics dovetailed nicely with my own.” (Where Life and Death Hold Hands)  Gerry Gerrard told me that it felt like they were basically a bunch of strangers.  On the other hand, over half of them had trained together for a short time as part of a larger group of Signals in Debert, Nova Scotia, and small groups of the men had been together as part of the 10th Fortress Signals in Vancouver and the 11th Fortress Signals in Victoria.
On October 28, Captain George Billings called his Signals section together on deck for the first time.  He introduced himself as a graduate of Kingston Military College and told them he had just returned from service in Britain. The group of thirty-two soldiers facing him represented various parts of the country:  nineteen were from B.C., six from the prairies, three from Ontario, and four from Quebec.  Four of them were still in their teens, most in their early twenties, and only three were over twenty-five.  All but five were single, although a few had left special girlfriends behind.  About half had served in the armed forces, either with militia units or the Active Service Force, for at least two years; only a few had less than a year of service.  So although the young men had not trained or worked together as a complete unit, for the most part they were well trained and had gained considerable experience in their specialties as operators, dispatch riders and linemen. (Beyond the Call, page 48)
Brigadier Lawson the “C” Force Commanding Officer, noted that the various Bde. HQ units were, “keen, anxious to work, well-behaved and so far as can be judged on board ship, are well trained.”
During the voyage, there were numerous training sessions, physical exercises, and lectures, as well as tasks in the kitchen, sentry duty and signals communication on the bridge.  Perhaps the highlight of the trip was the stop for fuel and provisions in Honolulu.  Signalman Rolly D’Amours wrote in his diary:
We were entertained by the Royal Hawaiian Hula troupe, and the fellows went quite wild about it.  The troupe performed on the wharf, and it was quite a job to get a ringside seat.  We were not allowed to get off the ship, but some of the fellows put on trunks and dove off for a swim.  The water was filthy but I imagine it was also very refreshing.  The military authorities finally posted guards to keep them from diving off, but some of them still managed to crawl through the portholes. (Courtesy of Pierre D’Amours)
Will Allister later wrote about the “undulating hula hips waving hypnotically as the troops roared, hooted, whistled, ranted and tossed gifts from the ship’s deck.” (Where Life and Death Hold Hands)
The men had been permitted to write letters home and the stop in Hawaii allowed for a mail drop.  My uncle Don Penny’s letter follows.  It would be the last communication received by his family for almost two years.  When he says, "If you don't hear from me for some time it is O.K. because the mail delivery may not be very good" he had no idea of the true meaning of those words. 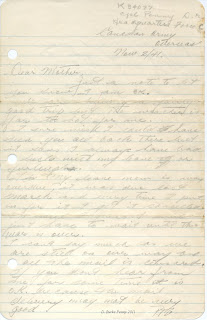 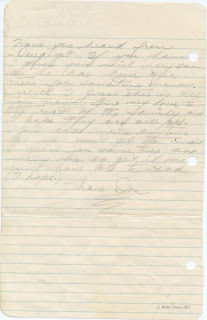 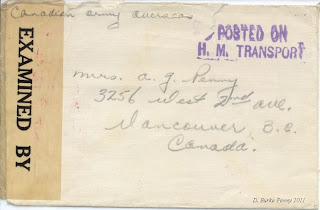 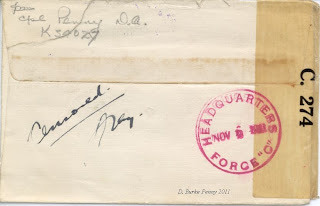 It was just after leaving Honolulu that the men were informed that their destination was Hong Kong.  Even though we were not yet at war with Japan, preparations for that possibility were now well underway.  The men were told that they should be prepared for anything when they arrived, “even fighting.”  The hilarity of the hula dancers if not forgotten, was overshadowed by more serious thoughts.  I imagine this was reinforced when on November 10, the following was included in “Routine Orders, C Force:”
21.  SECURITY
1.  The following will be read twice on parade, to all ranks, before noon Wednesday, 12 Nov. 41.  Care will be taken that no N.C.O. or man whether on guard, fatigue or other duty, is [o]mmited.
2.  We shall shortly put into our last port of call before reaching our final destination.  From there onwards our route passes between islands occupied by a country which is already giving assistance to our declared enemies and which may at any moment declare itself as an open enemy.  Even without such declaration it may commit acts of hostility against us.
IT IS THEREFORE OF THE UTMOST IMPORTANCE THAT NO INDICATION WHATSOEVER BE GIVEN WHILST IN THIS PORT REGARDING:-
Who we are
Our numbers
Where we have come from
The Direction in which we are going
Our final destination
3.  There must be NO conversation with persons ashore or in ships or boats which may come alongside.
4.  There must be NO shouting to persons ashore or in boats or ships, even to those in our escort.
5.  No persons will be allowed on shore.
6.  No mail or other communication will be sent ashore other than through regular channels.  Communications will NOT be handed to persons on shore or in boats, etc. for mailing.
7.  Personnel on guard where they may be seen from other ships or from shore will not wear “CANADA PATCHES”.  Dress for others will be shorts and shirts without patches.
8.  We are traveling in a New Zealand ship; provided the above instructions are carried out there should be no indication to persons in ships or on shore that Canadians are on board this ship.  To keep them in ignorance of this fact is exactly what we want and all ranks will govern themselves accordingly.
9.  Any person questioned regarding any of the above matters will refuse to answer and will report details of questioning at once to the nearest officer or N.C.O.
10.  Disregard of any of the foregoing will be treated as a serious offence.
11.  No coins, badges, cigarettes or other similar identificable [sic] matter will be thrown overboard.  (from Beyond the Call, page 53)
On November 16th the ship arrived in Hong Kong harbour and docked at Holt’s Wharf, Kowloon.  For all but two of the Signals (Capt. Billings and Sgmn. D’Amours), this was their first glimpse of the Far East.  Three weeks later they would be at war, fighting for their lives.
Posted by Burke Penny at 3:01 AM